Installing the vapor barrier for the roof was problematic. My first attempt using plastic failed. Condensation appeared overnight and after a week, a slimy scum arose. I couldn’t believe this building technique is usually recommended for Green Roofs. I switched to a more expensive paintable rubberized blue product – Blue like the Sky. 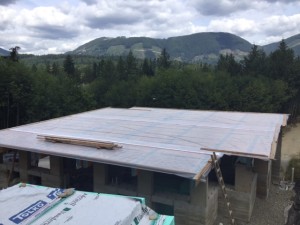 Tried plastic on the roof as code says. However, it was horrible. Condensation appeared overnight and after a week a scum was forming. Ripped the stuff off. Building codes are sometimes poorly though-out. 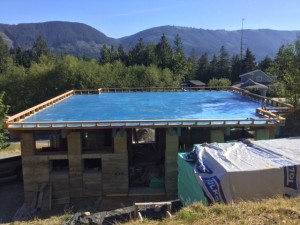 Building the parapet to hold in the insulation and dirt for green roof. 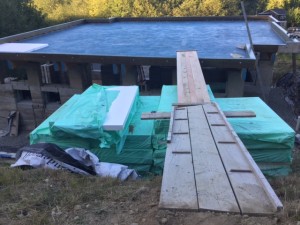 Tore off the plastic and used a more expensive paintable product. No condensation problems.